Orange Rooms: The Best Night Out In Southampton?!

Myself and my team recently took a little (okay, maybe not that little) trip to Orange Rooms for a night out, and let me be honest, it was pretty fabulous.

Firstly, the aesthetic of the club was lovely, we were lucky to have been situated on a table that was both right next to the dance floor, two seconds away from the bar (not that we actually had to move to the bar once, but more on that later), and also, which was my personal favourite thing about our table, we had a FISH TANK WALL, yes, you did just read that right, the wall next to our table had a fish tank, with actual live fish in it, which as you can imagine, once I’d got a few (and then a few more) cocktails in me, this fish tank and its inhabitants provided me with more entertainment than it should have. Although to start with the club was pretty quiet (we did arrive at 10pm to be fair) the atmosphere soon picked up as people began to come in for the night, and by the time we left, the club was pretty packed. 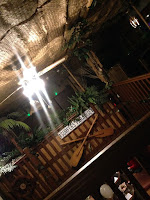 Orange Rooms is very unique in its set up, as there a various lounges within Orange Rooms, e.g. there is the “Off Piste lounge”, where you can try out a ski shot (I would DEFINITELY recommend this, this is 4 shots placed into a ski that you and your group have to all drink at the same time by tilting the ski to your mouth!), there is also the Tiki Lounge, which is a beautiful Hawaiian themed bar/lounge area, which in my opinion is the cutest of all the Orange Rooms lounges, the Tiki bar also hosts one of my beloved Fishtank walls (I may be becoming biased to these walls), in the tiki lounge you can order one of Orange Rooms famous flaming cocktails, served in a tiki mug with smoking dry ice for the added tiki effect. Orange Rooms also boasts it’s private lounge, known as ‘Room Service’ which is pretty impressive in itself! Hosting parties of up to 60 people, this is the perfect space to book for anything from a birthday party to a society gathering, in
Room Service you are also afforded the opportunity to use your own DJ or
to use an Orange Rooms DJ. Now my next topic may not be one for the faint hearted, however the toilets in Room Service are also something of legend, being the perfect medium between both modern day and that retro 70’s vibe that everyone is loving at the moment, with the ladies toilets even offering a hair dryer and twin toilets, to avoid that dreaded over crowding when both you and your friends all try to squish into one cubicle! There really is nothing quite like it! 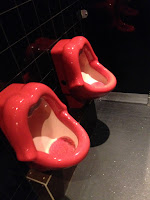 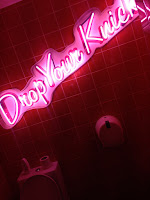 Now lets touch upon the service you’ll receive
when paying Orange Rooms a visit, because I
really do feel as though this deserves its own
section, if not its own blog entirely, as the
service that myself and my team received from
the Orange Rooms staff was completely above
and beyond anything we could have expected.
My first excellent service shout goes to Vicky, the Orange Rooms party planner, who couldn’t have been lovelier, from the get go, she organised such an amazing night for me and my team and even took the time to give me a tour on arrival to 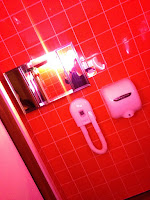 explain to me the different lounges and services  that Orange Rooms had to offer. I would honestly recommend booking an Orange Rooms event to anyone in the future, as honestly you the service that you will receive will be absolutely second to none. Secondly, both myself and my team would like to give a shout to Rhys the bar manager, who ensured that we didn’t have to make a move to the bar all evening, and also, made sure that we were all, all right throughout the evening, quite  honestly if you are looking for a night out, being served by the friendliest team that Southampton has to offer, then I urge you to take a trip to Orange Rooms, as you won’t be disappointed!!

Overall I would rate my experience at Orange

Rooms a strong 10/10, and would recommend
them to anyone looking for a decent night out
in the Southampton area!

As Always, Thank you for reading!

Bethanie Clarke
Welcome to my little corner of the internet. 23 year old, law graduate full of opinions and not afraid to share them. Want to collaborate or just say hi? Feel free to get in contact using the contact page above.

Dating In The 21st Century: Is There A Point Any More?

Modern Women Have Brains…. Get Over It!

🌻 Bethanie 🌻 ·
@BethanieMarie_
I propose an alternative campaign to banish this absolute idiot into obscurity once and for all.

Some people will do absolutely anything to try and keep themselves in the news, pathetic really. Whatever next. https://t.co/EM8v31F22I
View on Twitter
Nigel Farage@Nigel_Farage
I am launching a new campaign to kill of Boris Johnson’s ruinous green agenda.

We demand a referendum on Net Zero.

Read all about it in the Mail on Sunday. https://t.co/SRcqFspVCb
0
0

🌻 Bethanie 🌻 ·
@BethanieMarie_
Personally, I vote that we get rid of Boris and find a loophole where we can install @HackedOffHugh as Prime Minister, if you've watched Love Actually and followed his Activism then you'll know he's the perfect man for the job!

Someone please make this happen, I'm begging 🙏.
View on Twitter
0
0